Is the latest Calliope Image 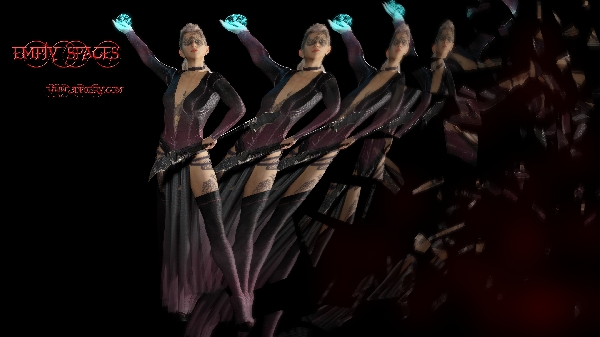 Calliope, the muse of all muses. Images of fantasy combined with reflections and light. Dark mood and atmosphere, deep character. And of course Tattoos

Out of the Night

In ancient times, they had there oddities,
Just as we have them with us now.
Their descendants changed in shapes and sizes,
The farmer forced to put away his plough.

I, am a proud descendant of the Emu,
A proud bird, who roamed the Ancient Lands.
The traits, of no flight remained though,
Imagine a Dragon, stuck fast on Garden's sands.

We did develop larger wings to compensate,
However, our huge bodies are too heavy.
But, this is only a physical restraint;
As the Great One, gave us the gift of Levee.

We are true dragons in all aspects,
Mystics in soul, in body we are Tenders.
We hardly ever, leave the borders of the Levee,
In the same way as the Ancient Pretenders.

"Well, well, well. What have we here? Zeme has finally gone and done something right. Hard to believe, isn't it Zeme?"
Zeme remained deafly quiet, with the still unconscious Hasten at his feet.
"What's the matter, Zeme! Devil gone and got your tongue?" Natas broke into a sadistic laugh. "Oh well, Zeme! I have plans for you. On your way back to the Between, drop in and see Raspitur."
Unbeknownst to Zeme, Raspitur has created a female Wigrae. Zeme was destined to go back to the Between, as a breeder.
"Before you go, Zeme; wake this Runner."
Zeme unlocked Hasten's legs, which relieved the pain in Hasten's mind. Hasten slowly came out of his drifting blackness.
"So, the swift little boy wakes. Nice to see, that you dropped in. Hmnn, what have you got to tell me little one?"
Hasten, still didn't know what had happened. Why it happened. Where he was. And, who this vile half person is. Then all of a sudden, it dawned upon him. He was within the walls of Mephisot.
"Come on little man. Tell me what's going on."
All Hasten remembered, was the Three Ancient Monkeys; Hear No, See No, Speak No Evil.
"Listen! Young fool. Something is happening, otherwise you wouldn't be walking all over my, MY Between!!!"
Hasten had consciously decided, to become all of the Ancient Monkeys.
"I can see, that I'm going to get absolutely nothing, out of you. But this much I do know; something is alive south of Mephisot."
"As for you, fool, say good-bye to your beloved Garden."
Hasten was placed in the Catacombs of Mephisot. An underground maze of dungeons. They say, that the only escape from the Catacombs is death. Even then, your spirit may well be still entombed.
Natas has set about getting information on what is stirring in other parts of Nothing.