Is the latest RavenCrow Image 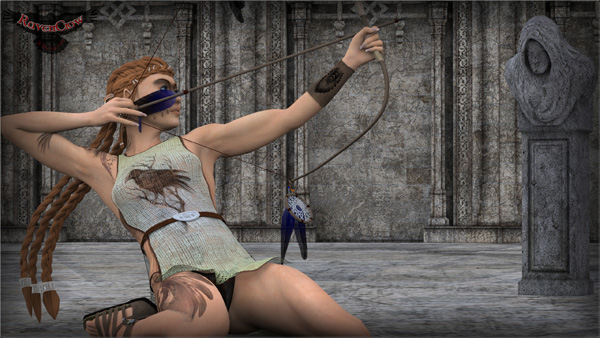 3D Poetry's tattoo Character RavenCrow was custom designed around native american indians and irish celts. HD wallpapers were only just starting, she was keen to join in.

Think I Got It

Here I stand in a garden,
Looking over a vastness of Nothing.
My friends stand close by,
Searching it's horizons for something.

We enjoy our own company,
As we know each other well.
Our domain is rarely challenged,
Excepting for the occasional cell.

Seasons change in favour for the foes,
Who march on Nothing's void.
Increasingly closer these villains approach,
Taking our sustenance into the void.

My friends shout, a shout of defiance,
Informing me of our Wandering Friend,
He visits on a weekly basis,
Delivering a blow to our foe's evil trend.

The tempestâ€™s bright white snakes had bitten Saracere,
In turn, the Assistantâ€™s hidden fortress was ablaze.
Who says good things donâ€™t come from bad,
Or that nights canâ€™t turn into days.

The blaze had destroyed the thick foliage,
That concealed Saracereâ€™s now blackened walls.
If it wasnâ€™t for the tempestâ€™s violent actions,
The Eleven would not have seen the ominous Ghouls.

The Ghouls are Natasâ€™s masters of ambush,
They are said to have come from the Ancient Lands.
Ghouls sneak up from behind their unwitting prey,
Attacking in vile and feverish bands.

Today wasnâ€™t their day, no not at all,
They had lost their element of surprise.
The Eleven conquered Saracere in simplicity,
As the tempest had opened their blind eyes.
Written by Dincara 1985-1986 Currently being illustrated by Ettenyl Laeb