Is the latest Saoirse Image 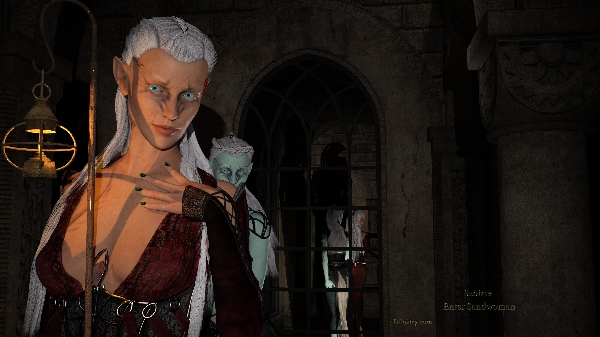 Saoirse (SOR-sha) was the fore runner to newer characters. A true celtic warrioress. She was the transition to DAZ 3D. Modestly tattooed to tempt the soul.

In the Hierarchy of the Garden,
We the Seeb are one of the top.
Having the dual role of midwives,
Plus keeping guard on the new crop.

We work on a seasonal basis,
Whether the Traveller is here or not.
We actually assist in the fertilising,
In a carefree seasonal trot.

We are truly rewarded well,
For the special skills we use,
Either preparing the fertility ritual,
Or just giving the enemy the blues.

When the season is out,
We return home with our treasure.
The Traveller often pays a visit,
Joining in the Feast of Pleasure.

I am writing to you once again, hoping that you are taking care of yourself, and my companions. By now, most would have introduced themselves. At the same time, a lot might not have. Take for instance, the Cogil, who resemble the Ancient Fairy. They need to be encouraged by their own kind.

These shy Tenders are hardly ever seen. But I know within myself, that these beautiful Tenders actually exist.

The Great One, very rarely shows himself openly, but, it is very easy to talk to him. By merely talking to Emalf, or one of the Dribydal, or any of the Great One's friends, it will end up, that you were actually talking to him. As Emalf is the closest to the Only One, messages are conveyed quicker.

Each member of the Tender's Company has their own different dialect. Strange as it is, what you think they are saying, is in fact exactly what they are trying to tell you. It's just that you have been too ignorant, to listen to these thoughts before.

That's right!!! I remember now why I was writing to you.

My trip, is going to be longer than planned. I bumped into an old ancestor. Nathaniel Sirrah-Arkey M. Now, that is old. Anyway, all I ask of you, is if you can keep an eye on Garden's well being for me? Thanks.

Until we meet again, the Wanderer.

If I died in your arms,
Where would you lay me?
If I needed to be helped,
Would you come and save me?
All these questions that could be asked,
The answers, I need never know.
For they are locked away,
Only you know how high the roses will grow.

The colour of our roses,
Bloom in burgundy and blue,
Thorns of hatred are blunt;
Isn't this the way we grew?
A fragrance beyond all encounters,
Deep colours like blood flow,
Into our hearts, deepening this love;
Only you know, how high the roses will grow.

Here I stand in a garden,
Looking over a vastness of Nothing.
My friends stand close by,
Searching it's horizons for something.

We enjoy our own company,
As we know each other well.
Our domain is rarely challenged,
Excepting for the occasional cell.

Seasons change in favour for the foes,
Who march on Nothing's void.
Increasingly closer these villains approach,
Taking our sustenance into the void.

My friends shout, a shout of defiance,
Informing me of our Wandering Friend,
He visits on a weekly basis,
Delivering a blow to our foe's evil trend.